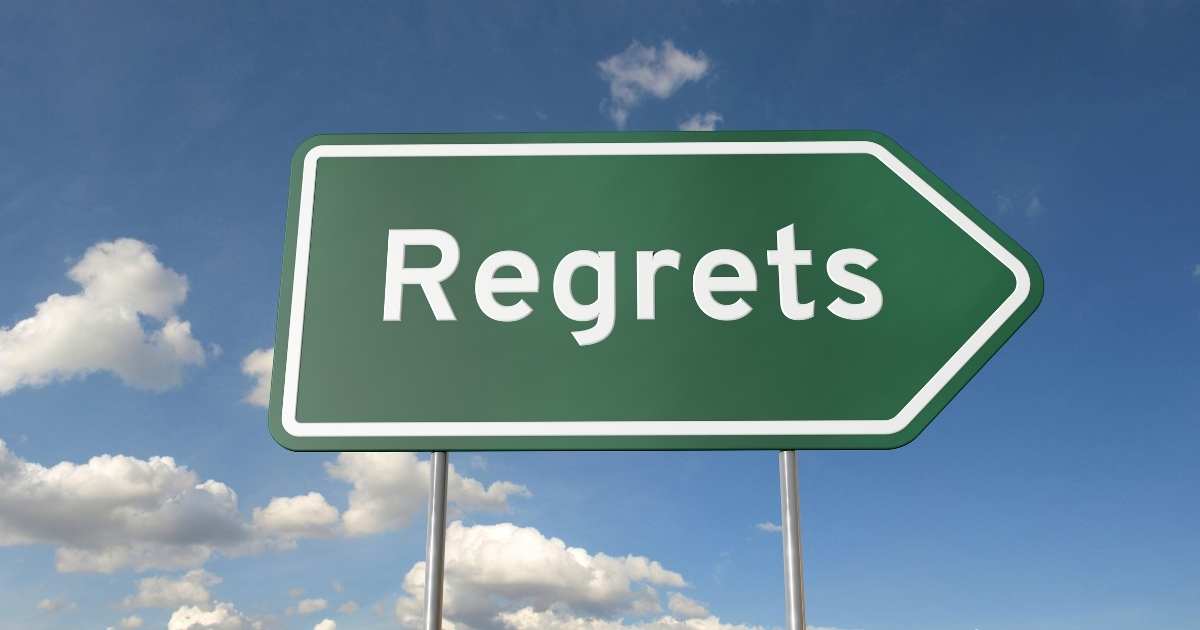 Regret. A Strategy for Change?

Regret. A strategy for change?

If you look back over your life, do you have any regrets?

Although many people try to leave their regrets behind, they often have a tendency to linger on.

Maybe a decision you made which caused your life to temporarily take a turn for the worse. Which caused you emotional pain. Which hurt someone else.

Because regrets are often considered to be the emotional consequence of a bad decision.

They arise when you find yourself mulling over something that happened in the past that could have turned out better. When you consider the “if only I had…” rejected alternatives of what else you could or should, have done (so-called counterfactual thinking). Alternative choices which might have resulted in the future turning out differently.

And regret is so powerfully felt because is it a decision that you made. It is personal. You caused it.

In contrast, being disappointed – a related feeling but one that isn’t based on a decision you personally made – is easier to cope with. It doesn’t imprint itself at the back of your mind in the same way.

You can see the difference between feeling regret and feeling disappointed if you measure the way that someone’s brain responds to a situation where there is a negative outcome based on a decision they made or a decision someone else made. A different set of brain regions are activated when you feel regret – namely greater activation of emotional-sensitive regions such as your orbitofrontal cortex and amygdala – compared to when you feel disappointed.

And that’s because regret has an important function. It has a cause. A point it is trying to make.

Listening to your regret.

Regret is an emotion for a strategy change.

It is trying to help you change tack. To take a new route in your thinking and actions. Stopping you making that bad choice second time around.

But it is not quite that simple. Because rather than encouraging you to take action, regret can sometimes cause you to stop in your tracks. It can evoke a fear of making the wrong choice.

So you make no choice. And you choose to stick with the status quo.

Stick with what you know.

This is exemplified in studies where scientists have shown that you actually feel worse when the regretted decision was a choice to do something a bit different. A bit novel. To move beyond the familiar and try and change the status quo.

It is like the brain is trying to stop you breaking out from what it knows. From its safe space.

And that is because it is.

Your brain’s preferred state is typically to stay in “protection mode”. It is pre-programmed to stick with the status quo. It prefers the familiar. It is fearful of the unknown. It likes to conserve energy by choosing the easiest route of action.

And sure that is one way to successfully live your life.

But what about the alternative? The decision to fight against this inbuilt status quo. To seek out new opportunities. To create real novelty. Be disruptive. Do something that other people don’t. Or won’t.

To do all this you have to be willing, and able, to overcome your status quo.

And scientists have also revealed what goes on inside your brain when you do this – when you take the more effortful mental route of rejecting the default option. They have shown that it involves a particular area of your brain’s basal ganglia – a region which is tasked with deciding what action you should take.

Of course, sometimes it makes sense to choose the option which takes you along a mental road well travelled. To exploit the familiar. You know where you will end up.

But sometimes, it is worth just taking a minute to ask yourself whether your brain is actually trying to work against you. Whether it is trying to prevent you from stepping out of your comfort zone when you really should be taking a risk.

And that is when you need to have the curiosity, the motivation and the courage to overcome your regrets. Your fears. Your status quo.

To go for that future opportunity which is maybe just too good to miss.

Tweet
Tweet
← Prev: Brain Training. Does It Work? Next: Serotonin. The Multifaceted Chemical. →
BACK TO ALL ARTICLES