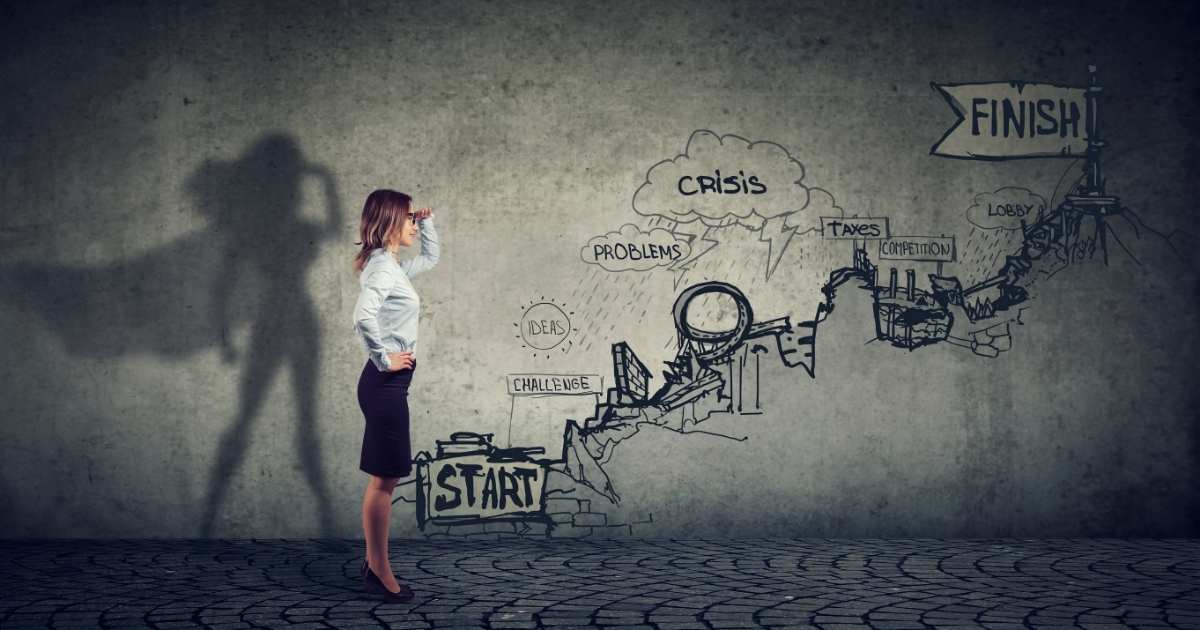 “ Courage is resistance to fear, mastery of fear—not absence of fear, ” wrote Mark Twain in this novel Pudd’nhead Wilson. In other words, having courage isn’t about being fearless. It is about being able to overcome, control and manage your fear.

Fear is a well-known barrier to success and progress. You can have the best idea in the world, be desperate to join in and contribute to a discussion, or have a desire to do something spontaneous or risky, but so often fear can stand in your way. It causes you to procrastinate, to be indecisive, to be shy, to avoid situations, or even, in the worst case scenario, to run away.

This is all very useful if you are about to do something that might potentially be life-limiting. But less good if it stops you showing your full potential at work.

Being able to overcome these fears, or at least manage them better, is, therefore, key to showing resilience in the face of a feared challenge.

From a neuroscience perspective, fear is one of the most studied emotions. For decades, researchers have been trying to understand the network of brain regions which are involved not only in the feeling of fear, but in the process of learning what should be feared, and what shouldn’t be feared. For example, studies have shown the neurobiological mechanisms which take place when you learn, either slowly over time, or suddenly, what is fearful. Similarly, researchers have also revealed the neurobiological processes necessary for “extinguishing” this fear – in other words re-learning that what you think is scary, isn’t scary anymore. Synaptic plasticity within the amygdala, as well as shifting patterns of activity in the ventral prefrontal cortex, is thought to underlying both of these processes.

Fear extinction is the gradual process of trying to retrain your brain to perceive a certain feared stimulus as not-fearful. This is, therefore, the opposite of what is happening during the process of “fear conditioning”. Extinction happens when you face your fear, but instead of receiving a negative “shock” or experience, you instead experience something neutral or positive. For example, if there is someone who strikes fear in you at work, maybe they surprise you by being kind and thoughtful.

An alternative approach is when you deliberately try and introduce non-fearful thoughts, experiences or perceptions into the experience to try and drown out the fearful elements of the experience. The idea is that over time, this retraining of something that was fearful, into something which is less fearful, leads to a flexible rewiring of the learned fear circuits in your brain.

However, sometimes you also need on-the-spot fear control. An instantaneous way of controlling fear which is about to take over your thoughts, emotions and behaviour. And this is where you need to engage your brain’s control mechanisms.

One study in 2010 explored this in a fairly extreme way by bringing in a live 1.5m long corn snake into the room where individuals were having their brain scanned. In this particular experiment, the researchers compared participants who were fearful of snakes, versus those who were used to handling them (i.e. fearless) and asked them to move either the snake, or a teddy bear (the control) towards, or away from their head, whilst lying in the scanner.

By tracking how the level of activity in the brain changed in relation to their behaviour, they were able to decode what was going on when the fearful participants showed the courage to overcome their fear (i.e. bring the snake towards their head) versus when they didn’t have the courage (i.e. pushing the snake further away from their head), and also compare these responses against the fearless participants.

At a behavioural level, they found that when people were able to either control their subjective feeling of fear OR their physiological fear response, then they were more likely to bring the snake closer to the head. In contrast, when both their physiological and subjective fear response was concurrently high, then they would be more likely to move the snake away. From the perspective of the brain, the researchers found that there was one particular brain region which correlated with the degree to which people were able to show courage. This was a region which is involved in a multitude of brain processes but most notably in relation to emotional and cognitive control and self-regulation and has been shown to be able to regulate the activity of the amygdala, potentially as a route for instant fear-control.

The study, therefore, introduces the possibility of training your brain to become better at regulating fear – in other words training it to show more courage. And there is also evidence that this might potentially be possible. For example, studies have specifically shown that some forms of meditation – in particular, integrative body-mind training (IBMT) – can improve self-regulation through increasing the level of neural activity and blood flow in the anterior cingulate cortex.

If you would like to find out more about ways to improve self-regulation and control as well as the consequences of this on emotion, cognition and behaviour, then please get in touch with us at Synaptic Potential.

Tweet
Tweet
← Prev: The Liking Gap Next: The Human Body and the Human Brain - United Not Divided →
BACK TO ALL ARTICLES